Kofi Kingston & Xavier Woods are heading to Las Vegas. Hashtag Sports announced today that the former-WWE Tag Team Champions will be hosting the 4th Annual Hashtag Sports Awards. The event is set to take place at The Cosmopolitan in Las Vegas, NV on July 12th, just 10 days after WWE comes to the MGM Grand Garden Arena for WWE Money In The Bank 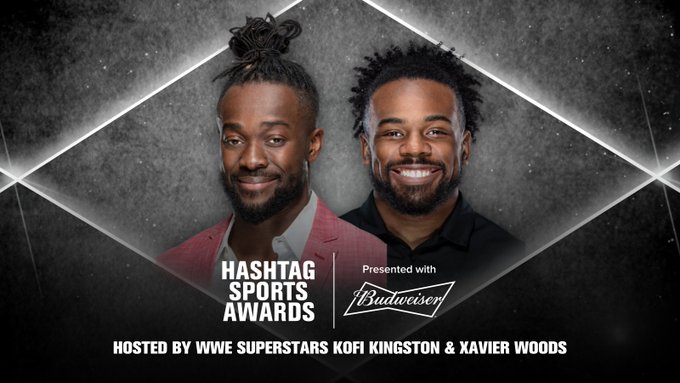 According to the brand’s site, The Hashtag Sports Awards is designed to “reward your doers and creators with the night of recognition they deserve for their hard work to keep fans engaged despite the challenges of the past two years.” WWE was honored at the 2021 Hashtag Sports Awards, where they received awards for Most Creative Partnership (without an athlete or influencer) for their work in the WWE Thunderdome, and also received an award for “Gender Equality in Sports” for the No Makeup Photo Shoot they did for the female superstars.

The Hashtag Sports Awards set the benchmark for effective fan and consumer engagement. The ceremony will take place during Hashtag Sports 2022 at The Cosmopolitan of Las Vegas on July 12.

The Hashtag Sports Awards is where media executives, CMOs, athletes, entertainers, creatives, producers, gamers, and storytellers all come together to recognize & inspire those who do it best on the biggest stage. This is your can’t-miss recognition and networking night for sports, content and entertainment’s doers and creators.

Kofi Kingston and Xavier Woods are only 2/3rds of The New Day, but Big E has been recovering from a broken neck since March 11th, and has no timetable for return as of yet.