Boxing legend Tyson Fury recently picked The Rock as one of his desired opponents for an exhibition bout.

Fury’s last match was against Dillian Whyte in front of a jam-packed Wembley Stadium. He knocked out Whyte in the sixth round, which saw him retain his WBC title. With the win, he extended his unbeaten record to 33.

Although he wants to stay true to his retirement from professional boxing, Fury is looking to explore the possibility of exhibition matches. In a recent interview with Good Morning Britain, the 33-year-old said he’s intrigued by the idea of putting up a show for fans. He went on to say that he wants to face the likes of The Rock and Mike Tyson on the exhibition circuit:

“This is not professional boxing, this is pure entertainment, that’s all it is, nothing more, nothing less. The difference is, the exhibition you’re not there to win or lose, you’re there to put on a show for fans. You can fight old-timers, famous people, whoever you want; I’m looking to fight Mike Tyson, Lennox Lewis, Frank Bruno, or Dwayne Johnson, The Rock. (H/T: Mirror) (from 1:08 onwards) 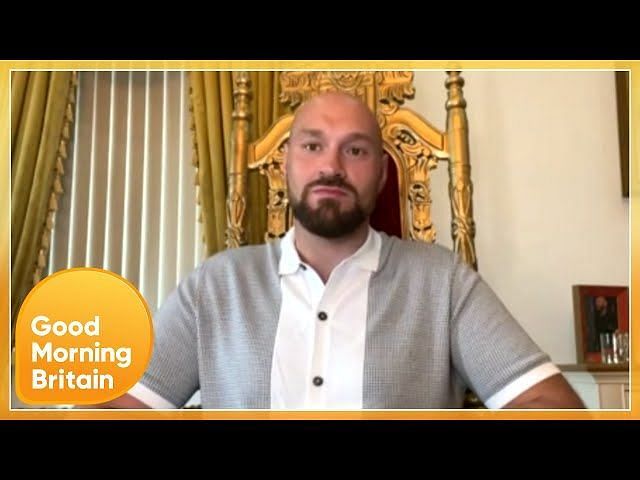 The two-time world heavyweight champion in boxing commented on a potential bout against Drew McIntyre.

The Gypsy King addressed the media following his win over Dillian Whyte in April. He stated that he’d love to knock out the former WWE Champion:

“Don’t rule me out of fighting there (the WWE UK stadium show)! You might see me at SummerSlam. I got to speak to Vince and the boys! I know Drew McIntyre has been saying a lot of things about me. I’d love to knock him out.”

The Gypsy King has unfinished business in WWE and with @DMcIntyreWWE in particular 😳#FuryWhyte pic.twitter.com/eVWWfb6jtS

If a match between The Rock and Tyson Fury materializes, it’d be a treat for wrestling fans. However, if the match happens, it won’t be the first time we see a WWE wrestler and a boxing star face-off. Floyd Mayweather and The Big Show locked horns in 2008 at WrestleMania XXIV.