5 Current WWE Superstars who are close friends with Brock Lesnar

Brock Lesnar recently returned to WWE after more than two months on the sidelines following WrestleMania 38. The Beast lost the WWE Championship to Roman Reigns in the main event and has since been licking his wounds and waiting for the right time to make his return.

Lesnar picked the opportune moment to strike on a defenseless Reigns, who was coming off the back of a title defense against Riddle. Following an F5, Lesnar secured a rematch at SummerSlam in what will now be a Last Man Standing bout.

While Lesnar received mixed reactions from the WWE Universe following his return, several stars will be happy that he’s back, the stars he considers close friends.

#5. Shelton Benjamin and Brock Lesnar have been friends since college

The reunion between Brock Lesnar and Shelton Benjamin at Royal Rumble 2020 was brilliant pic.twitter.com/zmQQgYubOH

One of the best-known friendships in WWE is between Brock Lesnar and Shelton Benjamin since the two men climbed through the ranks in the company together. Shelton and Brock first met while in college and later lived together before cutting their teeth in the wrestling business.

Lesnar has since become a star in WWE and hasn’t forgotten his oldest friend, as Shelton is the Godfather of his two eldest children. Brock has a son and daughter from his relationship with Nicole McClain, and Benjamin has promised to look over Mya and Luke.

As part of a recent appearance on the Out of Character podcast, Benjamin revealed that the current character Lesnar is portraying on TV is the Lesnar he has known for years.

“I would say it’s the most like he is in real life amongst people that he likes. I tell people all the time: one of the cool things with Brock is you never have to wonder where you stand with him because he’ll tell you, he’ll show you. He either wants nothing to do with you or you’re good friends. What you’re seeing to me is just Brock when he’s relaxed and amongst friends,” via WrestlingInc.

#4. Paul Heyman is the Godfather to Brock Lesnar’s children

"Why don't you ask my advocate Paul Heyman?" 😮

Paul Heyman turned his back on Brock Lesnar and joined Roman Reigns on WWE SmackDown back in 2020. This was seen as the ultimate betrayal, but the two men have remained close friends off-screen. Heyman is possibly one of the only men Lesnar trusts, which has been proven by the fact that Paul is now the Godfather of his two youngest children.

Brock has two sons from his marriage to Sable called Duke and Turk, and Heyman has been named their Godfather. Heyman has always believed in Lesnar and was the man who originally recommended him to Vince McMahon and then went on to become his advocate, which pushed him into the main event picture.

Brock Lesnar has made it clear several times throughout his career that he doesn’t like other people. He chose to live in the middle of nowhere to avoid civilization and travel in a private plane to avoid any interactions he didn’t want.

That being said, one man who has seemingly become good friends with Lesnar in recent years is Happy Corbin. The former champion has been pictured with The Beast enjoying dinner and drinks several times in recent years. It appears that Corbin has managed to infiltrate the hard exterior and become one of the men Lesnar sees as a close friend in WWE.

#2. Randy Orton and Brock Lesnar have developed a close relationship 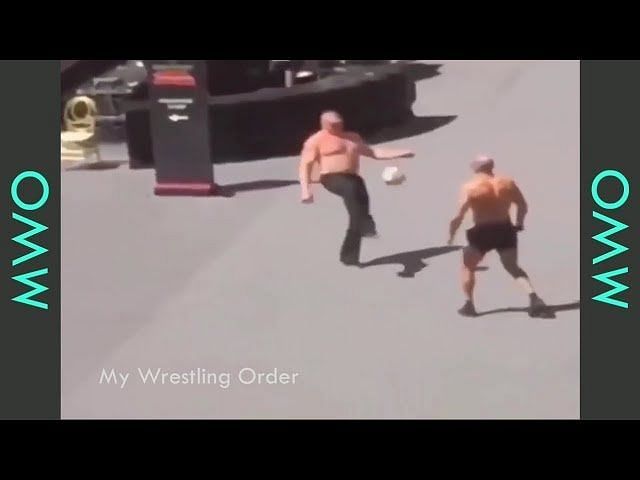 Randy Orton is currently on the sidelines and is reportedly set to undergo surgery for a back injury, which has allowed Lesnar to make his return and step into his place at SummerSlam.

Orton and Lesnar have crossed paths in WWE many times, with one of the most iconic battles coming in the main event of SummerSlam in 2016. Orton was legitimately knocked out and busted open by The Beast, which later led to a showdown backstage with Chris Jericho. Not many men would be trusted by Orton to do something like this, and it was known ahead of time that this would be the finish.

The two men have been spotted outside the ring several times, with one of the most interesting videos coming from Saudi Arabia back in 2018 when Lesnar and Orton were seen playing football with Cesaro like teenagers.

#1. Brock Lesnar and The Undertaker have mutual respect between them

Brock Lesnar and The Undertaker defined WWE throughout 2015 and had several emotional matches ahead of The Deadman’s retirement. Despite the two men not being close friends during their early careers, Lesnar was the man that The Undertaker allowed to break his undefeated streak at WrestleMania 30.

This catapulted Lesnar into stardom in WWE and made him one of the most hated heels in the company. In the years that have followed, the two men have become close friends and now have a lot of respect for one another.

Ahead of his retirement, The Deadman signed a 15-year deal with WWE, which will keep him around for the foreseeable future, even though he is no longer an active performer.