WWE is no stranger to seeing its superstars get into real-life relationships with each other. Being on the road almost all the time, it’s quite natural for wrestlers to get attracted to their colleagues and fellow wrestlers, and begin a relationship with them.

There have been numerous famous wrestling couples – while some kept their connections behind the screens, others went on to appear together on WWE programming. As with any normal human being, not every superstar’s relationship with a fellow wrestler ends up lasting forever.

While fans mostly remember some famous couples in WWE history like Triple H-Stephanie McMahon, Daniel Bryan-Brie Bella, and many others, there are quite a few that they might have forgotten about.

So in this article, let’s take a look at six such former WWE couples that you might not remember. Be sure to comment down and let us know your thoughts on the same.

Edge and Lita were such an iconic pairing in WWE.

Hated them so much as a teen but respect their work all these years later 😂 pic.twitter.com/PcGlmeZEM3

One of the most famous love triangles in the Ruthless Aggression Era was the one involving Edge, Lita and Matt Hardy. Lita, who was originally dating Matt Hardy, started an affair with Edge, and when Hardy decided to voice his frustrations on the internet, he was fired by the wrestling behemoth.

However, Hardy was soon re-hired by Vince McMahon’s promotion under fan pressure, with this real-life love triangle being turned into a storyline. The Edge/Lita pairing witnessed many memorable moments, like Edge cashing in his Money in the Bank contract on John Cena, and the infamous celebration that they had afterwards.

Over the last few years, Seth Rollins has become a huge name and one of the most bankable superstars in Vince McMahon’s promotion. It was in 2019 that the former Universal Champion’s real-life romance with fellow RAW Superstar Becky Lynch became public.

The two soon got engaged, and it was in May 2020 when Becky Lynch announced her pregnancy during an emotional segment on RAW. Over the last year or so, Rollins and Lynch have had multiple on-and-off screen appearances together, becoming somewhat of a new power couple in WWE.

But before finding the love of his life in Becky Lynch, Seth Rollins was in a relationship with former NXT Superstar, Zahra Schreiber. Now, not many of you might remember or even know about her, but the two have appeared together on NXT TakeOver events as part of the audience. Rollins broke up with her in 2016 while he was out of action due to an injury. There was a lot of social media controversy that went on at the time of their break-up!

In 2015, a super cute couple from the roster emerged as superstars Zack Ryder and Emma started dating each other. The two were seen posting pictures together on their social media and hanging out with friends. Sadly, the two broke up relatively quickly in 2016, much to the shock of many fans.

In their careers, Zack Ryder had his moments to shine in WWE, but not many. The peak of his career came at WrestleMania 32, when he won the Intercontinental Championship in a ladder match. He continued to compete for the company in various capacities until being released in April 2020. What many might not realize is that he was with the company for 15 long years. Zack Ryder began dating NXT Superstar Chelsea Green in 2017 and the two got engaged in 2019.

Emma was with WWE for a decent period of six years from 2011 until her release in 2017. While she was famous for her comedy acts in the early phase of her WWE career, she returned to NXT in 2015 and became a much more serious and fierce competitor. WWE had plans to repackage her as Emmalina but those plans never came to fruition. She is currently signed to Impact Wrestling and often works on the independent scene as well.

In a WWE Network special on Edge’s comeback journey to the ring, his wife Beth Phoenix has been shown to have a prominent role in his return. The love between the two is there to be seen for all in the documentary. But before dating Edge, Beth Phoenix was in a relationship with another wrestler, CM Punk, from 2010-2012. The two got quite serious at a point as Beth even moved to Chicago to live with him but they broke up in early 2012. It was after this that Beth started getting involved with Edge.

As for CM Punk, the former WWE Champion began dating fellow superstar AJ Lee and the two got married in June 2014, a while after Punk’s departure from WWE. AJ Lee also retired and left the company a year later in 2015 and is still missed by the fans to this day.

#2 The Undertaker and Sara

Quite similar to the case of Edge and Beth Phoenix as depicted in the last entry, WWE Network is currently airing a limited-series event based on the last few years of The Undertaker. In the said documentary, his wife Michelle McCool is seen as a true supporter and life-partner of the Phenom.

The documentary features a behind-the-screen version of The Deadman, who happens to be a great father and husband rather than The Prince of Darkness. The Undertaker mentions the respect and love that he has for Michelle for dealing with him all these years while also supporting him to the extent that no one would have.

The Undertaker’s daughter, seen here after he defeats John Cena at WrestleMania, is apparently immune to his mystique! pic.twitter.com/IWW4pMDAc4

But prior to his relationship with Michelle McCool, The Undertaker was married to Sara Frank from 2000-2007. She appeared in WWE as a valet for The Phenom in 2001 and 2002 and was a major part of The Undertaker’s feud with Diamond Dallas Page and Brock Lesnar. The entire feud with DDP stalking Taker’s wife ended when Sara defeated DDP on RAW with the help of The Undertaker.

WWE fans who have been following the product since the Ruthless Aggression era might remember that The Undertaker had Sara’s name tattooed on his throat, which he later replaced with the name of his two daughters.

Reminder: The Undertaker used to have his now-ex-wife Sara’s name tattooed on his neck pic.twitter.com/jJZLlnXa3q

I can't be only one who wondered where this Mickie James and John Cena storyline was going? Clearly Mickie and John would become a onscreen couple and to me later Mickie betrays John and turn heel similar to when Trish Stratus betray Chris Jericho for Christian and turned heel. pic.twitter.com/BAcTvQRkwp

John Cena is no stranger to dating fellow WWE Superstars as, throughout the years, his name has been linked to many female superstars and divas in the company. The most famous of them all happens to be his relationship with Nikki Bella, which was a huge part of Total Bellas and even led to John Cena proposing her in the ring at WrestleMania 33. Unfortunately, the two decided to break up shortly before their planned marriage.

Another major relationship that the Leader of Cenation had was with Mickie James. The two got together when Cena was married to his ex-wife Elizabeth Huberdeau and Mickie was said to be a key reason behind the 16-time world champion’s divorce.

The above information was revealed by Ken Doane, the man who was engaged to Mickie James at the time. All these incidents led to WWE releasing Mickie James from the company to protect the image of their biggest babyface.

Mickie James is currently with NWA Superstar Nick Aldis whom she married in 2015. John Cena started dating Shay Shariatzadeh in 2019, with the couple tying the knot in October 2020.

Suggested: Mickie James was extremely uncomfortable with this storyline! 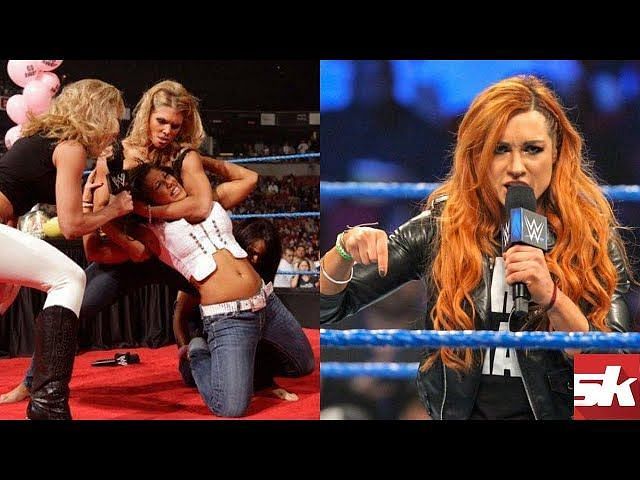 What happened when Stone Cold Steve Austin was asked to feud with 3 50+ year-old men? Find out here.