WWE Superstars portray their personalities and connect with fans through the help of promos. These can be scripted or unscripted, with the latter rarely taking place.

However, there are moments when a superstar crosses the line and CM Punk’s Pipebomb is an infamous example. In other cases, a superstar may end up saying something in the heat of the moment, such as The Miz’s tirade on Talking Smack. Such unscripted promos highlight the natural attitude of a WWE Superstar in the best way possible and stick to the memory of the fans.

On this list, we will look at the five greatest unscripted promos in WWE history.

‘Austin 3:16’ is a legendary catchphrase that has transcended over time. It was delivered by Stone Cold Steve Austin after he became The King of The Ring in 1996. Undoubtedly, it is one of the greatest unscripted promos in WWE history.

Stone Cold defeated Jake “The Snake” Roberts in the finals of the tournament. However, he was not done with his rival who supported a pracher gimmick at the time. The newly-crowned king called out his Christian beliefs, replacing Psalm John 3:16 with his own version of Austin 3:16. The Texas Rattlesnake followed it by warning other superstars that “they are all on Stone Cold’s list.”

The lines were a hit among the fans. Stone Cold rose to superstardom, eventually getting his hands on the WWE Title after memorable feuds with the Rock and Vince McMahon. The infamous Austin 3:16 moment was the beginning of the Attitude Era with his famous line, “that’s the bottom line coz Stone Cold said so!”

Cody Rhodes made a solid return to WWE when he crushed Seth ‘Freakin’ Rollins at WrestleMania 38. Following the Show of Shows, he delivered an unscripted emotional promo on RAW. It was highly praised by WWE and Superstars alike for his raw, heart-touching words.

The American Nightmare pointed out that his transition from AEW to WWE wasn’t a difficult one. He returned to fulfill a vow he made to his father, centering on capturing the WWE Championship. It was a title that eluded Dusty Rhodes for his entire career and his son wanted to win it to honor the memory of The American Dream. A teary-eyed Cody acknowledged the fans in the unscripted promo before breaking kayfabe to shake hands with his rival, Seth Rollins.

Emotional end as Cody Rhodes addresses the fans after #WWERaw. Thanked everyone for welcoming him back into their home. Fun speech! pic.twitter.com/sIo6NnUFvu

During an interview with The Bump, Cody Rhodes revealed that the promo was unscripted. He wanted to let the audience know his side of the story in an original manner. It was surreal to witness the former Intercontinental Champion cutting a promo in the WWE ring.

Since it’s Brock Lesnar’s birthday let’s take a look back at the time R Truth made him break character pic.twitter.com/Mv4ZwPG10T

R-Truth deserves a special award for making Brock Lesnar break character on Live TV. The historic 24/7 Champion not only cut his own promo but also won the respect of Lesnar and Heyman

The Suntan Superman and The Beast Incarnate had a hilarious interaction on RAW prior to the Royal Rumble 2020. R-Truth interrupted Lesnar’s promo. He declared his participation in the upcoming Rumble match before “undeclaring” himself after learning that he would be facing Brock Lesnar instead of Paul Heyman, whom he initially thought was in the 30-men Royal Rumble match.

The whole act was part of a bet that Paul Heyman was on the winning end. R-Truth made Brock Lesnar legitimately laugh with an unscripted promo at a time when he was the most serious heel, bent on destroying the main roster. 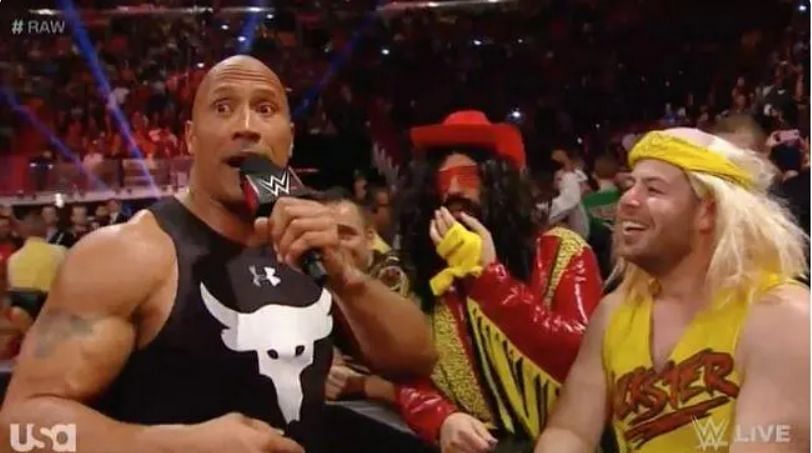 The WWE Universe was ecstatic when The Rock returned to officially kick off The Road to WrestleMania in 2016. The RAW segment was supposed to be short and simple. However, he was derailed by a bunch of fans cosplaying as WWE Legends.

This unscripted moment led The People’s Champion to acknowledge and interact with them at ringside. Their attires included that of ‘Macho Man’ Randy Savage and Hulk Hogan. The Rock even had a chat with the latter and Vince McMahon was understandably furious. Apparently, WWE was trying to erase The Hulkster from memory due to his scandalous remarks in a leaked video. The same also led to his termination in 2015 before his Hall of Fame re-entry in 2018.

The Rock has a significant amount of professional respect for Hulk Hogan. Dwayne’s father was a fan of The Hulkamania. Thus, WWE trying to bury Hogan might not have gone well with The Great One. The interaction with the Hulk Hogan cosplayer could have been his own way of rebelling against WWE’s decisions.

CM Punk’s pipe bomb takes the top spot in the list for, in his words, “breaking the fourth wall.” The incident occurred on a June episode of RAW in 2011. Punk aided R-Truth to score a win against John Cena in a Tables match and then proceeded towards the entrance area to deliver his iconic yet controversial words.

”The Voice of the Voiceless” let out all the steam he had for the company. His unscripted rant included the names of legends such as Hulk Hogan and Dwayne Johnson. He blamed Vince McMahon for stifling the talent with his creative decisions. If that was not enough, Punk used tabooed words such as “wrestler” and called the names of other promotions such as New Japan Pro Wrestling and Ring of Honor.

The two-time WWE Champion revealed that he had to improvise his speech as per the requests made by Vince McMahon. Nevertheless, he wrote his own lines and became the pioneer of the Reality Era.

The Best in the World had a tumultuous relationship with the company and eventually left the company in 2014, following his two-month suspension. CM Punk is currently the lineal AEW World Champion and is set to face Jon Moxley after his return from injury.

The most recent unscripted promo was seemingly between Roman Reigns and Theory. The Tribal Chief absolutely buried Mr. Money in the Bank in front of a live crowd at Madison Square Garden.

The incident occurred when Roman Reigns kicked off Monday Night RAW by delivering a promo for his match at SummerSlam. He was interrupted midway through his speech by the entry of Theory with his Money in the Bank briefcase. After a war of words centering on the MITB cash-in, Reigns owned the youngster, highlighting that his “daddy” is not there anymore.

It was a subtle reference to Vince McMahon’s retirement and how he had pushed Theory. The audience rubbed salt into the wounds of the youngster by chanting “Daddy’s Gone”.

Roman Reigns went off-script during his promo, according to Vince Russo. This could be possible, in all likelihood, as Roman Reigns has been the workhorse of WWE for a long time and has the ability to influence promos for the better. It was something so controversial yet so brave.