It is impossible to recreate a superstar resembling The Undertaker in all of sports entertainment. Mark Calaway, the man behind The Deadman, sacrificed most of his personal life to maintain the kayfabe for 30 years!

The Undertaker was very rarely spotted in public during his time as an active superstar. However, even at the time, he was in character and wore black clothes to maintain the aura.

A couple of days back, The Undertaker appeared at Ric Flair’s Last Match in Nashville. He was present with his wife Michelle McCool and daughter Kaia Calaway at Nashville Municipal Auditorium.

Taker was present at the show as a friend and as a fan of The Nature Boy. This was the first time in the last 30 years Taker showed up at a non-WWE wrestling event.

Michelle McCool shared their selfie on her Instagram with a ‘Blackheart’ emoji in the caption. The black color represents The Undertaker character. Even though Mark Calway is retired, he still wears black as a lifelong habit and tribute to his other side, i.e. The Phenom.

The last match of 73-year-old Ric Flair was truly phenomenal. Even so, it was a surprising sight to see Taker at the Jim Crockett Promotions event. As a WWE Hall of Famer, Taker is under a special contract with the company. Normally, WWE stars don’t appear at the events of another pro-wrestling promotion. Hence, nobody imagined seeing him at any show outside WWE, even though he has the free will to enjoy his life as he wants.

It seems after being The Undertaker for 30 years; he wants to live his life as Mark Calaway to a full extent. He wants to be more in public, interact with fans and spend quality time with his family, which he wasn’t able to do freely while being an active wrestler. Nevertheless, it’s good to see the legend finally enjoying his life as a normal person.

In the first episode of season two of WWE Legends Biography Live–The Undertaker, Michelle McCool revealed how it scared her to think about what the future held for Taker after wrestling.

McCool said, “I knew that gonna be hard for him. That’s the scary thing. Who am I as Mark Calaway the person or where do I go from here? Wrestling is all he’s done and all he’s known for 30+ years”. 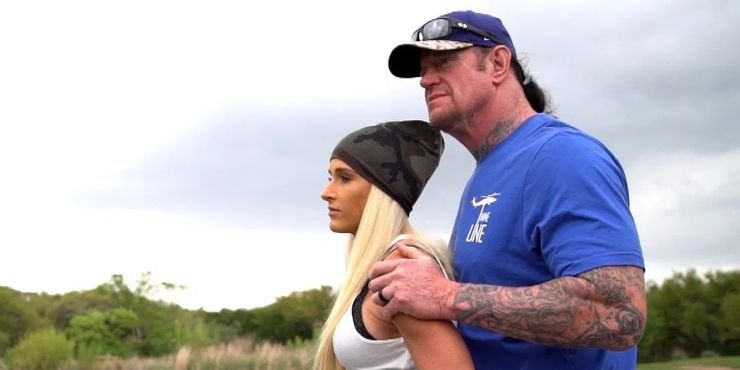 The only reason The Phenom hung up his boots was that his body wasn’t responding to perform the way he wanted to. Moreover, this is the toll of all the exceptional things Taker did in his career. He put his body through everything for 30 years in WWE to entertain the fans.

Moreover, he expressed more about himself at the Hall of Fame ceremony when was inducted earlier this year. Taker is happy to have an illustrious career and glad to live life now to the fullest, and so is the WWE Universe.